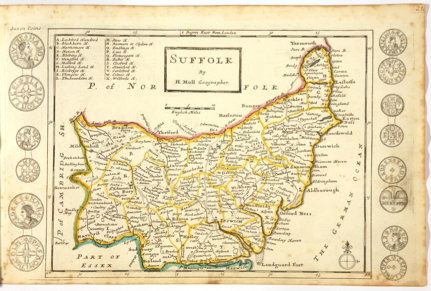 The place-name ‘Easton Bavents’ is first mentioned in the Domesday Book of 1086, where it appears as Estuna. It appears as Eston Bavent in the Charter Rolls of 1330. The first part of the name means “eastern settlement”. The Feudal Aids of 1316 show that the village was then held by Thomas de Bavent, Bavent being a place near Caen in Normandy.

During the Middle Ages Easton Bavents was a parish of some importance, granted a weekly market in the 14th century, along with a three-day fair on the feast day of St Nicholas of Myra (6 December). Records show the parish church, dedicated to St Nicholas, was still in use in 1639, and a rector appointed as late as 1666. The church seems to have sunk under the sea in the latter part of the 17th century and is now about one and half miles out to sea.

Although, thanks to the pace of coastal erosion, Easton Bavents is a much smaller place now, The following description from “Suffolk Chronicle and Mercury” from 1934 about the locality is as true now as then

“There is little to attract the attention but the fields, the marshes, the winding lanes, the pleasant countryside. Yet permeating this countryside, adding to its wholesome, healthy aspect, is the freshness of the nearby sea, so that everywhere there is the fragrance and the attraction that only the ocean and the countryside combined can provide, and which in themselves possess an atmosphere definitely invigorating, and most certainly appealing”

Our family has owned the land at Easton Bavents since 1925. It was originally purchased by Herbert Boggis who had plans drawn up by the famous architect Patrick Abercrombie to create a kind of leisure village here with bowling greens and tennis courts. Unfortunately, the Second World War came along and the land was pressed into production so the plans never came to fruition. The family has continued to farm the land, originally as a dairy farm and more recently as an arable farm.

The farm is now maintained as a private and peaceful estate in walking distance of Southwold. The area is subject to very aggressive coastal erosion, the farm when purchased in 1925 was 371 acres, in the intervening years the sea has taken over 110 acres of this. This situation has required some creative approaches and the family now look to share the beauty of this very special place with visitors to their bespoke, moveable holiday cottages.

The Listening Station and The Watch Room were built on the site of an old Royal Navy Y Listening Station built during the second world war. The land was commandered by the navy who built the listening station and many large atennas on the land. The station was manned by wrens who stayed in Southwold and were brought up to Easton Bavents to work shifts listening out for German E-boats. The site now provides the perfect spot for brand new holiday properties with seclusion and amazing sea views.